So I very nearly made this into a video review series for my new YouTube channel - heck, maybe I still will; I got as far as recording and editing some voice-over. But I guess I realised making these into videos would take more time than it'd be worth given my currently non-existent online following. Damn, that's a bit of a defeatist attitude isn't it? Well, never mind. Better crack on, it's been a year since I did the last batch... 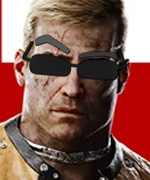 Nazis! Nazis in the 1960s! Nazis ruling 'Murica! Nazi robots firing laser beams that go BWAAAH! It's a Wolfenstein game all right and it's pretty darn all right. The new series continues to impress with memorable characters, Mick Gordon soundtrack awesomeness and did I mention Nazi robots firing laser beams that go BWAAAH? Wolf II leaps from Schindler's List to Inglourious Basterds to Iron Sky so fast it's hard to keep up. It has the most ridiculously over the top story beats in any big budget game and I kind of love it for that reason. Gushing too much? Well, the balance seems a bit off. It's a chaotic action game where a single enemy can down you in half a second. Normal mode's about as unforgiving as Doom 2016 on Nightmare. Fortunately I kind of like Doom 2016 on Nightmare, but I wouldn't dare crank it up any harder, bloody hell... BWAAAH! 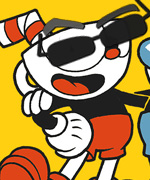 "Well, Cuphead and his friend Mugman, they like to roll over and die." Something like that. It's no secret that Cuphead looks pretty special. The 1930s Disney / Fleischer aesthetic looks incredible. All the characters look great in motion and the game really really wants you to notice because - oh look, I took my eyes off the screen for a split second and now I've gotta try again. But, hey - old school difficulty is cool if you're into... pattern recognition and absolutely no room for error... yay? 2 player mode is a bit confusing and the game seems weirdly broken for something so mechanically straightforward. But, if allowances can be made for style trumping everything else - Cuphead, I guess, gets away with it. Pro-tip: Try duct-taping the fire button down so that you don't get hand cramps. 
Oh hai internet I didn't know it was you. James Franco plays the mighty Tommy Wiseau, a messenger from another planet who loves all things Shakespeare, Hitchcock and spoons. A fitting choice of actor, considering that once Tommy played James Franco in a movie called 127 Hou- oh wait, no, that was a cartoon I made. This, of course, is a movie based on the book based on the making of The Room, the ultimate lightning in a bottle moment for 'so bad they're good' movies. Franco does an amazingly nuanced, precise impression of Tommy. His admiration and morbid curiosity of the source material shines through and pays off in unexpectedly great ways. I should know, I'm pretty obsessed with it too. Overall, I consider it the funniest movie of the year and I'd recommend it whether you're familiar with The Room or not. Thanks a lot, bye. 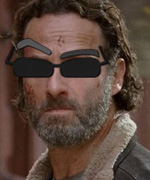 The Walking Dead: Season 8 (Part 1)
Oh dear. I'm just going to ramble through this one because I don't think it deserves a coherent analysis at this point. The Walking Dead has completed it's deterioration into a bloated mess of a show. A show structured around geographically confusing firefights that are supposedly following Rick and his fellow survivors' 'plan' to depose Negan. I say supposedly... 8 episodes in we still don't know anything about the plan. Or how the Saviours' supplies and general state of health seem to randomly fluctuate up and down with each passing ad break. Speaking of ad breaks, the show keeps doing this thing where it pretends to do pretentious artsy non-linear editing. But it's not artsy - quite the opposite; it's letting the ad breaks dictate the edit. There's no rhyme or reason to the scene ordering. Just a cold, hard, flow of cash that they forgot to give to the lighting crew in night-time scenes. So dark, you can't even see what's going on. I could continue, but you're better off reading these hilariously cutting Forbes articles. 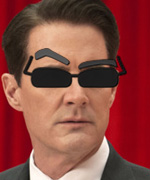 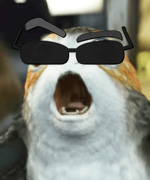 Star Wars: The Last Jedi
Do I really have to review this now? I don't think I'll bother. I just wanted to put sunglasses on a Porg.


Well, it's basically the end of the year, here's a list of list the things I enjoyed most from 2017, including stuff I didn't bother to review:
Games: Super Mario Odyssey, The Legend of Zelda: Breath of the Wild, Wolfenstein II, Resident Evil 7, Sonic Mania
Movies: The Disaster Artist, Blade Runner 2049, Logan, Baby Driver, War of the Planet of the Apes, Get Out, Star Wars: The Last Jedi
Shows: Twin Peaks, Better Call Saul, Fargo, Game of Thrones, Mr. Robot
Best Overall Thing: Nintendo Switch, obviously!
Honourable Mention: PlayStation VR. Yeah, picked up one of these in a Black Friday sale, as you do. My overall opinions are more or less the same as they were when I wrote this VR opinion piece last year.
Posted by Tom C at 16:18