The Witness Nearly Drove Me Insane

FULL SPOILERS for The Witness below. If you haven't played it yet, I suggest you go check it out.

God damn, if I hear 'In the Hall of the Mountain King' one last time, I'm going to have an aneurysm.

I'm referring of course to the final challenge in Jonathan Blow's artsy-fartsy line-drawing puzzle behemoth, The Witness, in which after many tens of hours of careful, measured problem solving and cryptic realisations, Blow throws a curveball. Take all the puzzle mechanics we've become so accustomed to but switch things up - now there's a time limit, and the puzzles are randomly generated.

The Witness' challenge section is an immediately intimidating tonal shift for a game that for the most part encourages a thoughtful pace. Until this point, the player could have (if they had no shame) essentially brute forced the majority of the game's puzzles, or worse, just looked up a tutorial online. Doing so effectively removes the entire point of the game, but for a game this resolutely demanding it's sometimes hard to avoid that temptation

I especially feel for anyone who's colour blind:
(I'm not even colour blind but I figured out I could beat this puzzle by using the PS4's video sharing feature and playing it back frame by frame - a nice little 'meta' solution I was quite proud of)

So, anyway, the challenge section... There's no way to take the easy road here - the challenge is a test of skill. Even an apparent 'cheat' that involved you being able to 'pause' on PS4 by turning the console onto rest mode and back on again has been nixed. The challenge section is a test of skill. Well, skill and luck - more on that in a minute. You could argue that it's an entirely superfluous part of the game that most people would happily pass up, but I'm not so sure. After literally about 30 hours in this world, assuming you've already activated all the lasers, it's hard to resist the pull of the final challenge.

Especially when it's the only trophy left to unlock...

So, you attempt the challenge. Classical music comes on - instantly unnerving for a game that until now has had very little sound to speak of. The first few mazes are simple, giving a false sense of security that isn't going to last. It takes a while to realise that the fourth maze is actually a map of where you need to physically walk towards the end. It became a routine for me to stop for a second and take an actual photo of the screen with my phone. So what? I'm useless memorising directions. You might I'm already showing signs of madness for doing this but I doubt I'm alone. Still, it's slightly disturbing looking back through my phone's images and seeing this: 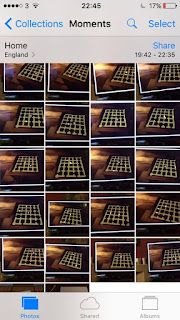 Wow, I really tried this a lot of times, didn't I?

Not counting attempts where I restarted right at the beginning so as to get a perfect early run, I've probably attempted the challenge run over 100 times across 2 or 3 weeks. Why? Because I knew it was possible. Because after 30 hours of god damn line puzzles, I wanted to prove I could do it.

For a while it almost seemed hopeless. After the initial four easy puzzles the cavern gives way to a larger set of puzzles that come on in a random order and throw more complicated rules into the mix. Tetris blocks - I'm no good with shapes! Symmetrical lines - the absolute bane of my life. Then of course comes the part where you're presented with three puzzles, of which only one is solvable. It's quite a skill to be able to correctly discern, within the space of seconds, whether a puzzle is even solvable - a good many of my runs frankly ended at this point, and it doesn't help that getting a puzzle wrong actually pushes you back.

Then it's on to the physical maze I mentioned earlier - things are incredibly tense at this point because it's incredibly easy to get lost - the triangular puzzles are often some of the hardest ever, and in the 1% of cases when I actually manage to best them both, it's on to the final room - the cylinders.

The cylinders are evil.

Maybe they aren't actually evil, but the first few times I reached this point, it almost felt hopeless. There was no way I could calm down enough to think about what I needed to do, and with a symmetry puzzle - especially one where you can't see the whole puzzle at once - this should be a priority. By this point, if I'm lucky, the challenge mode's second song - the aforementioned In the Hall of the Mountain King, has either just started or well on the way to its full blazing finale. Either way, it makes things almost overbearingly tense, and painful when all I'm doing is standing there facing a puzzle I just don't know how to solve. I think I've got it but - nope - I've missed a dot. Try again. No, I don't see any other way of - oh, too late. Back to the first room. Try again.

So eventually I realised - turn off the sound. Sure enough, an hour or two of relatively relaxed attempts later...


The Mountain King had barely even begun! I had no idea until I watched it back later - but I'd beaten it with a solid two minutes to spare - a record time I don't think I'll ever be able to replicate, even with some of the embarrassing faffing in that video as I wandered about trying to find where the puzzles were.

I think I got lucky. Watching the footage back, a lot of the parts I tend to have trouble with - the symmetry, the triangles, were about as straightforward as I've ever seen. Is this fair? Is The Witness' final challenge based on luck, not skill, after all? I'm not so sure, but after over 100 failed attempts, this moment stands as one of the most powerful, euphoric and rewarding moments I've ever had with a game. That's the reason I had to write this blog. I've never quite experienced anything like this with another game. And I don't even know how I feel about that.

The Witness has certainly left an impression on me, then. I haven't even talked about the game's biggest 'eureka' moment yet - The fact that there are hidden puzzles everywhere in the environment, hidden in plain sight. Many people have mentioned how their view of the real world has become somewhat warped and that they are seeing Witness puzzles any place there's a circle and a line, or a grid, or the shadow of a tree branch, and I totally relate to them. Hell, the game's 'secret ending' even did that literally, even though it's a ridiculously pretentious amateur-hour live action plod. GoPro Blow?

The Witness is also one of the only games where leftover squared paper from my maths degree has actually come in handy. 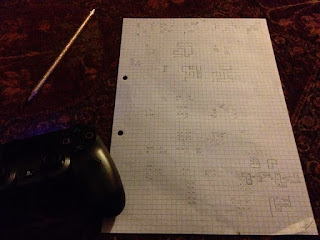 It's a weird thing that happens as you get drawn in to the internal logic of Blow's game. It's almost like it's rewiring your sense of perception. It's scary - and also very empowering. It nearly drove me insane, but it shed a light on how my brain learns and adapts to new information. It's a very rewarding experience that proves that you don't need guns and action and pretty graphics - you can make an absorbing experience out of nothing more than a few hundred line puzzles... and pretty graphics.

PS: To any fans of the game, I highly recommend watching / listening to Blow's commentary with the Giant Bomb guys - it's pretty much a must-see for anyone wanting to digest the many intricacies.

Now excuse me, I have to go stare at more circles.